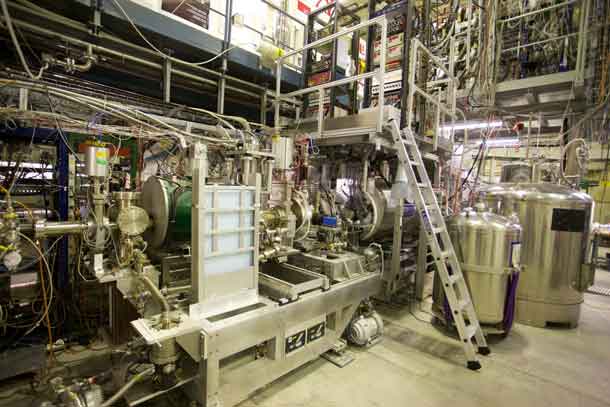 CERN – TECH – Swansea University scientists working at CERN have made a landmark finding, taking them one step closer to answering the question of why matter exists and illuminating the mysteries of the Big Bang and the birth of the Universe.

In their paper published in Nature the physicists from the University’s College of Science, working with an international collaborative team at CERN, describe the first precision study of antihydrogen, the antimatter equivalent of hydrogen.

Professor Mike Charlton said: “The existence of antimatter is well established in physics, and it is buried deep in the heart of some of the most successful theories ever developed. But we have yet to answer a central question of why didn’t matter and antimatter, which it is believed were created in equal amounts when the Big Bang started the Universe, mutually self-annihilate?

“We also have yet to address why there is any matter left in the Universe at all. This conundrum is one of the central open questions in fundamental science, and one way to search for the answer is to bring the power of precision atomic physics to bear upon antimatter.”

It has long been established that any excited atom will reach its lowest state by emitting photons, and the spectrum of light emitted from them represents a kind of atomic fingerprint and it is a unique identifier. The most familiar everyday example is the orange of the sodium streetlights.

Hydrogen has its own spectrum and, as the simplest and most abundant atom in the Universe, it holds a special place in physics. The properties of the hydrogen atom are known with high accuracy, and one in particular, the so-called 1S-2S transition has been determined with a precision close to one part in a hundred trillion – equivalent to knowing the distance between Swansea and London to about a billionth of a metre!

Now in these latest experiments, the team have replaced the proton nucleus of the ordinary atom by an antiproton, and the electron substitute is the positron. By shining laser light at a well-defined frequency onto antihydrogen atoms held in a trap, they have seen that some of them get excited to an upper level, and in so doing leave the trap. This very first experiment has already determined the frequency of the antihydrogen transition to a few parts in a tenth of a billion.

Professor Mike Charlton added: “To get some sense of the importance of this discovery, we need to understand that it has been 30 years in the making and represents the collaborative work of hundreds of researchers over the years. Enquiries into this area of physics started in the 1980s and this landmark achievement has now opened the door to precision studies of atomic antimatter, which will hopefully bring us closer to answering the question of why matter exists to help solve the mystery as to how the Universe came about.”

Source: netnewsledger.com
Read more
The ‘Whey’ to Go – Rethinking waste from yoghurt production
New Image of Ceres from NASA’s Dawn Spacecraft
Technologies That Will Have a Presence in All of Our Lives Before Long
Super Robot Wars
Facebook
Twitter
Linkedin
WhatsApp
Viber
Email
Previous articleNew Year’s Gaming cards – Happy Holidays
Next articleApple’s Sixth-Oldest Store Relocating on January 28 After 15 Years
IT Informer
I am a Experienced in Wordpress, SEO and Social Media Marketing with also extensive experience in forecasting and data analysis. My passion is Website Speed optimization. IT Informer is a place where I and my colleagues follow the latest IT trends.

One of the most important social-welfare campaigns in China right now is the push to eradicate poverty – and e-commerce...
Read more