How to prolong the life of your Android battery

Battery life is one of the biggest issues in the Android world today. Years ago the battery of our smartphone could last for whole days without recharging it. However, today we usually need to charge it several times and even carry an external pocket battery just in case our phone dies while we are not at home.

One of the main reasons people spend money on a new model is their current device beginning to slow down noticeably or the battery draining too quickly.

There are also many myths out there explaining how to extend your battery life. Along with the myths, there are also a few nuggets of truth if you dig far enough.

Firstly, most Androids and iPhones have chips built in that prevent them from absorbing excessive electric current once they are fully charged. This means you will not be damaging your phone if left on charge all night using an official charger. Also, because of the fact FAST/QUICK charge is a negotiated protocol; if both ends of the handshake do not agree it will drop to standard charging.

The only thing you could do to really damage the battery would be using a charger that is beyond the batteries voltage specs, so, stay with the official charger.

Regardless of which phone you use, let’s look at the battery itself.

Most Li-Ion batteries have a 2 to 3 year lifespan. This is irrespective of how much the battery has been used, this still holds even if the battery is unused. Of course, with a lot of charging and discharging the degradation process will speed up, the reality of it is you will lose days of use not years…

As with everything else in life, batteries age and will begin to show a capacity decline as time goes by.

The general consensus of opinion is:  charge your battery when it is between 20-40% and charge it up to approximately 80-90%. This will get you the longest life out of your battery.

Below are a few steps you can take to squeeze more juice out of your device:

1. Check How Much Power Your Apps or Components Are Using

Some apps and widgets can use a lot of power when you use them or even when you’re not using them:

Navigate to Settings – Battery to see an organized breakdown of what’s consuming your phone’s battery. Applications and features will display in a descending list of battery hogs. If you see an application you barely use or a feature you never use, you’ll want to uninstall the app or turn off the feature. 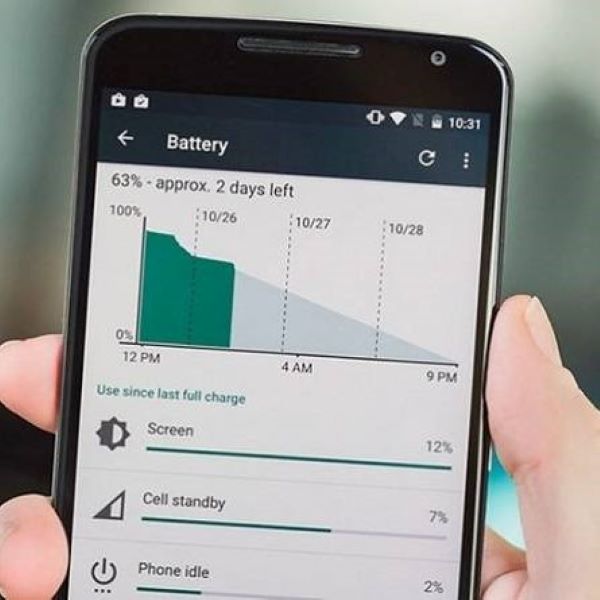 Access “Settings” then scroll down to select “Display”, tap “Brightness “. Uncheck “Automatic brightness,” then manually adjust the brightness level to a comfortable level, then tap “OK.”

Speaking of screens, if you set your screen timeout to a shorter period, you may get a bit frustrated at times (due to constantly having to enter your PIN/password/pattern), but you’ll save battery life. If you have the timeout set to, say, two minutes, and you use the screen for 30 seconds, your screen is on for 90 seconds of unused time. If you check your screen 20 times a day and look at it for 30 seconds, you’ve wasted 30 minutes of screen display time. That adds up. Set your screen timeout as low as you can tolerate.

Go to Settings – Display, tap Sleep, and select the shortest timeout you can deal with (the shortest available is 15 seconds). 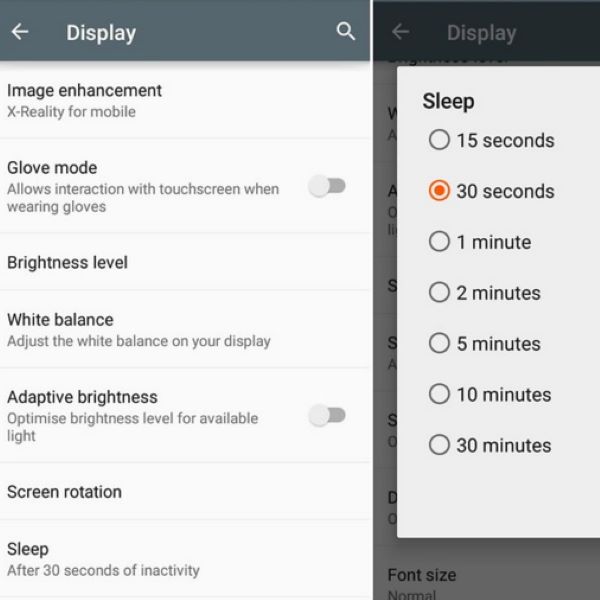 This may seem obvious to some people, but you should turn off the things you aren’t using. Bluetooth, NFC, WiFi, GPS, etc. These things can use a surprising amount of battery. There’s no point in keeping Bluetooth on if you don’t have anything connected. WiFi can suck up a lot of battery when you’re away from home. Why keep NFC enabled when you rarely ever use it?

This way, you can add an hour or more to your phone’s battery life.

5. Close apps running in the background

By killing apps that you aren’t actually using, you can drastically reduce your CPU’s workload and cut down on its power consumption.

In case you were unaware, applications will periodically check for updates on their own unless you tell them not to. If you want to find out which of these are doing this, head to Settings – Apps, and swipe to the left; you’ll see a list of apps that are currently running. Tap on each one to see what they’re for; you can stop any apps that you don’t need running in the background.

Some apps themselves are particularly heavy on battery life. For example, Facebook and Spotify could be to blame for a significant battery drain. 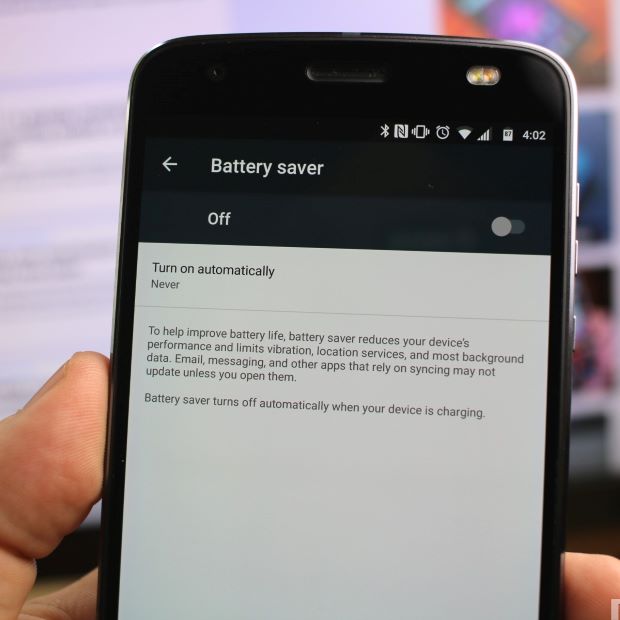 Most phones these days have some sort of built-in “Battery Saver” mode. Some phones have more options than others. Samsung, for example, includes a couple of power saving modes. Regardless of device, these modes put your phone in a low-power state to conserve battery. They will block apps from running in the background, limit performance, dim the display, and more. You don’t want to have these modes enabled all the time, but they can be very handy in a pinch.

Go to Settings – Battery/Power. Look for Battery Saver. Some phones will have an option to have it turn on automatically when the battery is low. Enabled that. Turn on now if needed.

Some of us might have observed that our battery runs out faster when our smartphones are warm. Put simply, don’t leave your smartphones under direct sunlight or in any place that is hot.

One of the more common occurrences would be leaving the smartphone in a car parked under the sun. The battery will function optimally in cooler environments, so do look out for, and try to avoid, scenarios where your phone is exposed to unnecessary and excessive heat.

Delete widgets that you aren’t actively using, especially those connected to the internet, such as weather widgets. If you have multiple widgets across several home screens, which are constantly syncing and updating (e.g. Twitter, Reddit, Weather or Gmail), consider deleting the lesser used widgets and simply open the app when you need them. 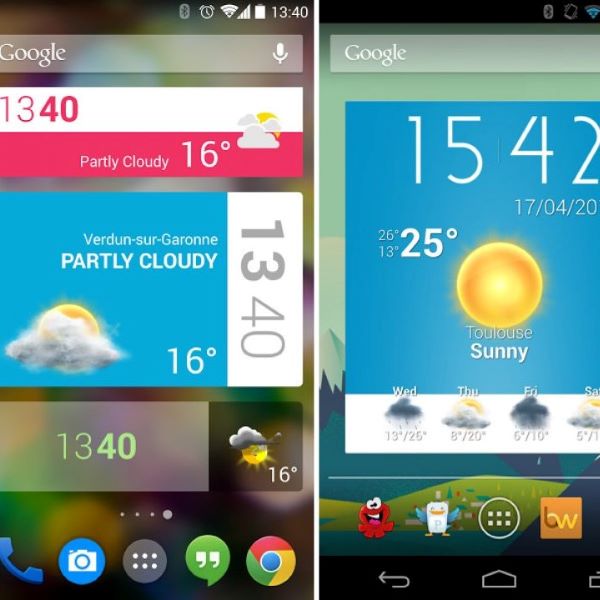 Vibrations are great for notifying you about incoming calls or messages when you’re in the theatre, meetings or other places where it’s necessary to keep the phone silent. In places where it doesn’t matter, it will be better for you to use your ringtone as notification if you want to keep your smartphones on longer.

Vibrations actually use up more power than ringtones. The sounds produced by ringtones are just very tiny vibrations in your smartphone’s speaker. Compare that to the shaking of the entire phone via vibrating a smart weight, playing a ringtone definitely zaps less of your battery. The same applies for using vibration for tactile feedback. If you don’t think it’s necessary, then disable vibrations or at the very least, lessen the magnitude of the vibrations.

Finally, as we’ve mentioned, it’s worth rebooting your phone from time to time, rather than leaving it in sleep mode all the time. This can sometimes cure otherwise inexplicable battery draining problems.

Some of today’s smartphones (such as the Samsung Galaxy S6, LG Flex 2 and Yotaphone) are fitted with AMOLED screens. These differ from other technologies such as LCD as AMOLED does not have a backlight – each pixel has its own light, and the brighter the pixel, the more power is used. The battery drain on an LCD screen is constant, regardless of how bright or dark the screen being displayed is, but a darker screen on an AMOLED display will draw less power than a brighter one. So if you were to change your background to a cool black image it’s going to be better than a bright background picture. Test suggest a 10-20% saving can be achieved, which is not to be sniffed at!

Greenify is an app that can save a lot of your battery power from being drained needlessly.  It allows you to choose through all of your apps and disable any that you feel you do not need unless specifically chosen. You do not need to uninstall any of them either. The app will monitor them all for you. Bear in mind that you do not need to have rooted your device to use this either.

Finally, when you have optimized all you can and you are still not getting enough battery life, it might be time to start looking at investing in a Powerbank. these mobile chargers can provide your phone with extra power several times before they need to be re-charged. Sure, it is a pain to carry around an extra brick in your bag, but for those times when you really need to top up your battery, they can be lifesavers.

Source:
rtechnews.com
syncios.com
Read more
How to Change Screen Resolution on a Samsung Galaxy S7 and S7 corner
Tips & Tricks for the LG V20
How to recover deleted photos from mobile | Androind
How to Transfer Contacts from Android to PC
Facebook
Twitter
Linkedin
WhatsApp
Viber
Email
Previous articleThe dramatically changing cyber threat landscape in Europe
Next articleFix iMessage Waiting For Activation 2018
IT Informer
I am a Experienced in Wordpress, SEO and Social Media Marketing with also extensive experience in forecasting and data analysis. My passion is Website Speed optimization. IT Informer is a place where I and my colleagues follow the latest IT trends.